Home What is a Salesforce Trigger?

What is a Salesforce Trigger?

Deep navigation through the Salesforce platform needs no technical knowledge – simple tools and techniques let many users to deal with the Salesforce specific tasks and operations. Among the many vital concepts, Salesforce Triggers are the important ones dealt by admins and coders. They have an utmost importance in many of the Salesforce-related applications. This article gives a brief information on Salesforce triggers and their significance.

What is a Salesforce Trigger? 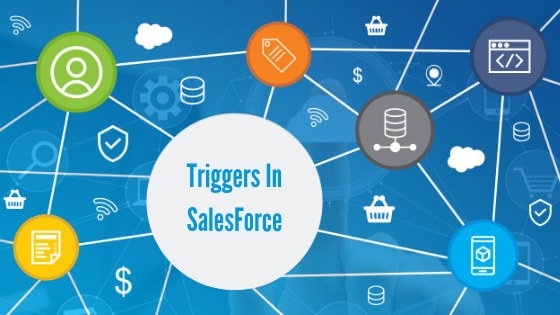 As known, Salesforce includes no or minimum coding means for processing various applications – this is because of the Salesforce triggers which are the simple codes which perform specific actions. Simple actions of point-and-click mechanisms in Salesforce are able to do customized activities – behind lies the Salesforce triggers that help perform these actions through the actual coding mechanism. The triggers ease the work of developers, administrators, sales people, and other operators. There is no need to struggle with the business logic – only set the simple parameters and switch on the triggers to get your job done.

The more coding inclusions into triggers make the users easier to work on Salesforce. Therefore, Salesforce platform is the best for non-technical and technical candidates as well. Salesforce triggers are, hence, an internal coding integration means that outsource specific desired procedures.

Cloud Computing - What it is and How it works?

What is DevOps? Perfect Guide to Beginners

What is AWS? Why to prefer it?

Salesforce Certification – The Best Aid to Your Career Boost

What is the Salary Range of Salesforce Professionals in India and US?

Salesforce uses many programming technologies – among them Apex is one significant coding language that is used for various applications. Salesforce triggers are developed with Apex and so termed as Apex triggers. Their function enables freedom to do customized actions like modifying Salesforce records.

Upon these particular events, the triggers are fired out in Salesforce.

Here is the simple way to understand when and where Salesforce triggers work. Salesforce includes databases to deal with storage of different types of data, data analysis, etc. Before inserting the object’s records in the database, you need to run a trigger which imposes codes to include them. They are also run after deleting records, or fixing records from the recycle bin.

Actually, there are no different types of triggers – but as the triggers are used before or after certain operations, they are considered to be of two types.

Before triggers – These triggers run before the activity like updating or inserting a record into a database.

After triggers – These triggers are run for accessing the field values set by the system. They are also used to affect the changes in the records. For instance, after triggers are often used when dealing with audit tables and also when you handle asynchronous events with a queue. These after-triggers are considered read-only.

Syntax of a Trigger

The definition of a trigger starts with the trigger catchphrase and then followed by the trigger name.

Any required code is written here.

The Trigger_Events can be a comma-separated list of any events like – before insert, before update, before delete, after insert, after delete, after update, or after undelete.

Considerations for implementation of Triggers in Salesforce

Certain considerations are to be kept in mind when implementing Salesforce triggers. Here are some of them.

There are certain context variables which implicit the triggers – they help developers to access the run-time context.

Having an idea on these triggers is very much important for developers and other Salesforce users to manage the appropriate functions accurately.

At some instances, bulk operations are in need to demand certain applications – bulk triggers are helpful at this time. However, mostly, the Salesforce triggers are all bulk triggers as multiple records can be processed at a single point of time. However, when planning to manipulate and manage huge data and multiple processes, then it is necessary to go for bulk triggers accordingly. They enable operations like – Lightning platform Bulk API calls, Data import, and Mass actions like record owner changes and deletes.

Trigger enabled development is involved in Salesforce. So, each operation handled by the user on the Salesforce user interface platform is done simply – but, there is an excellent contribution of these Salesforce triggers to ensure appropriate function and operation accurately and efficiently.